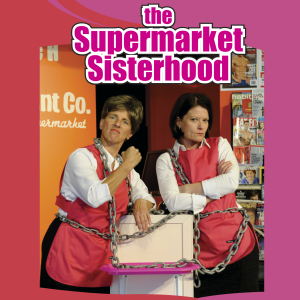 As if the daily skirmishes with farcical customers and the dim-witted men in their lives, wasn't enough, the women who operate the checkouts at the Discount Co supermarket are now facing a new boss and the prospect of losing their jobs to newly installed automated checkout aisles.

If the women are going to endure these challenges they're going to have to fight together and take things to a whole new level. Hilarious, madcap humour to tickle your funny bone and stir your heart.

Barbara: Aged in her early 60’s, Barbara has been at DiscountCo for her entire working life. A mother to now grown up children, she was divorced a long, long time ago. Barbara’s life has not been an easy one and as a result she has developed a hard shell. Barbara is resistant to change and has found some comfort in the routine of the life she leads. Holds a flame for Mr. Everson, but, due to her past, she is wary of complicating her predictable life with a relationship.

Michelle: Can be played as late 20’s through to early 40’s. Michelle, took time out from her University studies and never returned to them. Her threats of going back to University have become less and less convincing with each passing year. Michelle tends towards being highly-strung and susceptible to anxiety. Engaged to Rob who also works at the supermarket.

Aisha: Mid 20’s to early 30’s. An immigrant with a Master’s Degree in the field of technology, Aisha is only at the supermarket while she looks for a higher paying job in I.T. Her English, though accented, is excellent. Aisha has a sunny and fun loving personality but is not without ambition. Aisha’s ethnicity has purposely not been defined in the script in order to widen the casting possibilities for your production. You may wish to rename Aisha (and references to Uncle Ravi and Panya) to a name appropriate to the ethnicity of your character.

Rob: Appropriately aged to match his fiancée, Michelle (late 20’s to 40’s), Rob is a butcher at the supermarket. By nature Rob tends to be down to earth, happy to go with the flow, and avoiding of conflict. Rob, however, is not a pushover, and, when sufficiently motivated, will rise to the occasion. Rob is on the same social football team as Brian.

Mr. Everson: Aged 65, Mr. Everson is the recently retired former owner of the supermarket. He has dedicated his life to the supermarket, and now that he is retired, he is looking for adventure. His sense of propriety has stopped him from pursuing the relationship with Barbara he would have liked.

Brian: 20’s to 30’s, visits Aisha everyday who he is desperate to impress. Unknown to Brian his social skills are lacking at times and this can make him appear a little mean spirited and unintelligent. He is however neither of those things. Aisha understands this better than the others. Brian is on the same social football team as Rob.

Susan: In her 60’s Susan is a busybody and regular customer, along with her best friend Sharon, at DiscountCo. Susan tends to dominate Sharon.

Sharon: In her 60’s, Sharon is best friends with Susan (they are inseparable) and a regular customer at DiscountCo. A busybody.

The play calls for various other customers who can be played by 3 or more actors depending on to what degree (if at all) you double the roles.