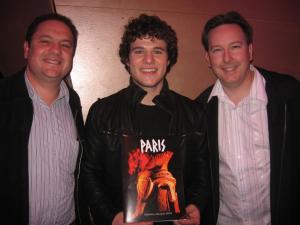 Luke Zancanarro was a busy teenager during June and July.

The Sydney student was rehearsing for two DSP shows at once.

He played a power Achilles in Oakhill College's production of Paris.

At the same time he played Michael Feldman in Sydney Youth Theatre's Production of Back to the 80's.

Luke is pictured between me and Neil Gooding in front of Oakhill's Trojan Horse.