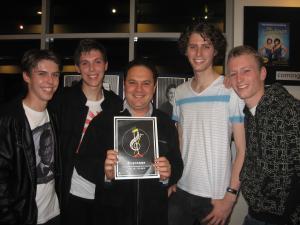 Wollongong had never seen such a combination of brains, brothers and tap dancing.

What a treat for me to  see such nimble footwork from Moonglow Productions for their performance of Hot Shoe Shuffle at the Illawarra Performing Arts Centre in NSW.

Five members of the cast were related. There were the  Sanderson brothers and the Bell Brothers with their real life on stage Dad.

The lads were dancing in between studying for Doctorates in Physics and Actuarial studies.