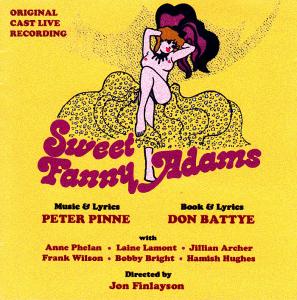 Sweet Fanny Adams is set in the 1930s around the infamous red-light district of Palmer Street, Sydney. The show is built around two madams, who are constantly at war with each other, their clientele and their loves. It is loosely based on the real life characters of Tilly Devine and Kate Leigh. Tony Sheldon writing in the liner notes for the show’s commercial recording said, “Give it a Go” was his favourite song from the show calling it ‘one of the great showstoppers in Australian musical theatre.”

Fanny and Kitty are making their regular Monday morning appearance at the court of Petty Sessions on charges of running houses of ill-repute. The bent Judge, who receives commissions from both girls, administers a lowly fine and dismisses them.

Fanny crows to her partner Dick that she beat the rap once again. Dick warns her not to be too cocky – her luck won’t last forever. Charlie, a taxi driver, enters having just dropped off some new customers. Kitty and Fanny celebrate their courtroom victory. Charlie enters with Nellie, a fresh-faced girl from the bush. She tells them Charlie said they could give her a job. Charlie takes Nellie to Kitty’s where the Judge moves in on her.

When Nellie starts to work for Kitty she becomes her number one attraction. The Judge is delirious. Fanny is fuming that Kitty has the best young pro in Australia. She wants Nellie working for her. Dick promises to turn the tables for Fanny by putting the hard word on Kitty. He fins Kitty a formidable opponent.

When he produces a razor, Kitty laughs at him and tells him he’s got to prove he’s a man. Dick can’t resist Kitty’s approaches and succumbs to them which Charlie witnesses.

Later, Fanny is opening a new sly grog shop and the whole street is invited. Fanny is pleased to see Nellie in attendance. She assumes she will be working for her now. Charlie spills the beans about how Dick managed to get Nellie there. Fannie is furious, pulls out a gun, and shoots Dick.She is hauled off to jail. Kitty rejoices in victory, but the celebration is a little premature.

Fanny enters with Dick who only ended up getting a flesh wound. They all want to know how Fanny managed to free herself from jail. She tells them she played the ‘graft and corruption game.’

Back at Fanny’s place, Nellie tells Charlie she is missing the country. They discover they like each other. Nellie proposes but Charlie is reticent. Nellie exhorts him to loosen up a bit and give it a go.

Fanny and Kitty fight over who Nellie should work for. A meelee ensues. The Judge fines everyone for brawling and order Fanny and Kitty to meet him later. He wants them to stop fighting and get together. Charlie feels he’s not making it with Nellie and asks for Dick’s help. Dick dresses in female attire and Charlie makes love to him.

Fanny and Dick argue again. For once he stands up to her and he leaves. Fanny believes he’ll come back. Fanny and Kitty meet the Judge. They don’t want to work together. Finally the girls decide to band together to beat the Judge. Charlie uses his new found confidence on Nellie and she accepts him with open arms. Fanny is happy for the young couple. Dick, reflective on his life with fanny, realizes he needs her.

He returns to Fanny with a marriage license and a new job as an SP bookie.

Fanny Adams 30-40 A faded, but warm, no nonsense madam who was once pretty in her youth. She is always at odds with the law, but knows her way around the traps to keep operating. Good chest voice needed.

Kitty Lang 30-35 A clever, successful, madam, who is always on the lookout to beat her rival. She uses her sex appeal to get what she wants. Good chest voice required.

Judge 50-55 A crooked Judge who is happy to be bribed. He uses the law for his own ends.

Dick 30-40 A pimp and layabout who lives of the earnings of Fanny. Not afraid to use a razor or his fists.

Charlie 20-25 A young enthusiastic taxi driver. He’s happy to be part of the Palmer Street milieu – they need him as much as he needs them. Always ready to do a mate a good turn.

Nellie 20 A fresh-faced young innocent girl from the bush, who discovers she can get paid for something she used to give away for free. Sweet voice.