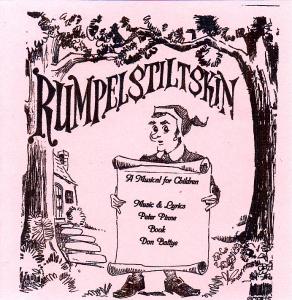 “Everybody had a good time.” (The Age)

When Rumpelstiltskin premiered at the Alexander Theatre, Melbourne, the critics went overboard with their praise; “full of original and listenable, clappable words and music,” “… clever, well-done and delightful,” and “One of its catchy songs spoke for the entire play ‘Everybody had a good time.’ This is enchantment.”

With reviews like that was it any wonder the show went on to be produced around the country to the delight of audiences young and old. This version of the Grimm Brothers fairytale about a magic elf, Rumpelstiltskin who spins straw into gold, is fleshed out with an endearing set of characters from greedy King Grump, the storytelling Snuffle, and a toffee making Aunty Flora Dora.

Gretchen, a young pretty miller’s daughter, lives with her Aunty Flora Dora on the edge of the wood. Gretchen likes to sing, but King Grump had forbidden it in his Kingdom, however a Knight, one of the King’s singing inspectors overhears her and wants to arrest her.

To stop her going to prison, Aunty Flora Dora makes extravagant claims about Gretchen’s ability to do all sorts of things including that she can spin straw into gold. The Knight is amazed and can’t wait to tell the King about her.

Aunty Flora Dora hopes that Gretchen will meet the Prince and he’ll want to marry her. She also hopes Gretchen can make the King cry and break the curse on the bees in the Kingdom who only make sour honey. Her toffee has never been the same since an evil little gnome gave the curse to King Grump as a coronation present.

Gretchen is taken to the palace to see the King. She meets Prince Helmut who is bewitched by her beauty. King Grump can’t wait for her to start spinning straw into gold.

Alone with a spinet she breaks down and cries. Rumpelstiltskin, a gnome, appears and offers to do the job for her if she gives him her necklace and ring but she must never tell anybody he did it otherwise the gold will turn back nito straw. She agrees and goes to sleep. In the morning she is surrounded by a pile of gold.

The King is delirious and greedy. He wants more. Aunty Flora Dora is caught trying to spirit Gretchen out of the palace and is sentenced to hard labour in the kitchen. Prince Helmut has fallen in love with Gretchen and tells his father he wants to marry her. The King agrees but only after she’s spun more straw into gold.

That night Rumpelstiltskin visits Gretchen again and this time agrees only to do the job if Gretchen will give him her first child after she becomes princess. She is horrified but reluctantly agrees to play his game. Once the child is born if she can guess Rumpelstiltskin’s name then she gets to keep the child.

She goes to sleep and the little gnome goes to work. In the morning the King is delirious once again but Prince Helmut is also delirious too because he can now wed Gretchen. While the King drools over his new barrowload of gold, plans are made for the biggest wedding in the land. Later, after the biggest christening in the land, Rumpelstiltskin appears to collect the new born child.

Rumpelstiltskin dances for joy, believing the princess will not guess his name. Unbeknown to him, Gretchen has sneaked into the wood and overheard his jubilation. When Rumpelstiltskin appears the next day Gretchen is ready for him and this time she guess his correct name. He hops around stamping his foot and screaming.

Everybody enters wondering what the noise is all about. Gretchen confesses she didn’t spin the straw into gold, that Rumpelstiltskin did. The King enters with a barrowload full of straw. He is so distraught he has lost his gold he cries. As soon as he does Aunty Flora Dora realizes the spell of the bees has been broken. She rushes off to make some toffee as Rumpelstiltskin once again stamps his foot so hard he disappears through the floor.

Rumpelstiltskin
Indeterminate age. A small, impish man with an evil laugh. It is first and foremost an actor’s role. The songs can be speech sung if necessary.

Gretchen
18-20 A young pretty girl with a soprano range.

Aunty Flora Dora
40-50 A comedy role. Could be played as a panto dame.

King Grump
40-50 A character role for a plump actor. One solo song.

Prince Helmut
20-25 Young and handsome. Everyone’s idea of a Prince. Needs to be able to sing.

Gallant Knight/Dainty Maid/Merry Man/Snuffle
20-25 These comedy roles are doubled so an actor with experience is required.

Everyone Had a Good Time.