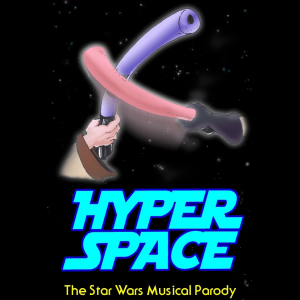 Hyperspace puts the Farce into the Force as you are taken on an all-singing, all- dancing, ( totally unauthorised ) parody-tribute of one of most successful film franchises of all time.

Join Duke Kneejerker, his loyal robot RU DED2, and his sister Princess Highway, as they search for the last missing episode of Hyperspace, the intergalactic soap opera that thrilled trillions throughout the galaxy.

Who could have stolen the last episode? Was it Duke’s father, the evil dark lord Duck Waiter? Was it nefarious gangster Slappa the Gut? What do Yokel and Kombivan Wiltomi know of the theft? The galaxy will be at war if the last episode isn’t found!

Hyperspace has  catchy tunes, and is written to be enjoyed by people who know little or nothing about Star Wars.

The original versions played twice a night: an early family-friendly session and a late night session for more mature tastes.

Hyperspace can be performed as a one Act Musical or as a Double Sci-Fi feature with Warp Drive.

PRINCESS HIGHWAY      her daughter. A princess in more ways than one.

DUKE KNEEJERKER        her son. A bit of a dweeb but well-intentioned. He has a blue pool noodle.

and an ARRAY of  ALIENS & SPACE CRITTERS with the occasional line.

Trouble in the Galaxy.

I Brake For No One.

May the Sauce Be With You.

12.5 % of Box Office Gross. Or 16% as Sci-Fi Double Feature with Warp Drive. $350 for Licence to photocopy script and vocal line. Plus set of band parts.