Shezza and Leo Get Married - A Big Fat Italian Wedding 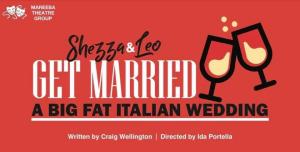 Not just an outrageous comedy. This is an event, as an Italian Grandmother Madonna Paola Giuseppina Maria Donatella comes back to haunt her grandson Leo at the worst possible time on his wedding day.

From the 1980's style bucks and hens nights, through the wedding and reception the audience are guests at this event of the decade.

The setting is a Bridal Table with a dance floor around it. The audience sits at tables around the room as they would a wedding. They are the wedding guests. The production requires service of a three-course meal. A bar should be operated, but not with table service as it is too distracting. Speeches and re-enactments take place on the dance floor in front of and around the central table. Numerous lighting states are required but, if performing in a space where this is problematic, music alone can be used to indicate scenes changes.

The optimum presentation has the Groomsmen and Bridesmaids double as other characters. This is done by simply adding a hat, scarf, glasses, or using a single additional prop. The casting combinations are:

The following cannot double as other characters due to the structure of the narrative:

ANDREW (does double briefly as UNCLE GIUSEPPE – a cameo without dialogue)

Father of the Groom, MARIO Donatella

Mother of the Groom, SOFIA Donatella

Aunty of the Bride, JANET Smith

BARRY (the actual audio/lighting technician, referred to and indicated, non-speaking)