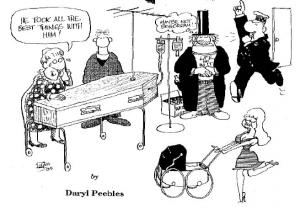 Seamus Shenanigan has recently died, the most likely cause being liver failure. It was his wish that "his mates from the boozer" should send him on his way in a manner that befitted his life.

This wake is a most suitable send off. His "boozer mates" unfortunately are the audience; the paying public! If only they knew!

Alas the sobriety of the wake is shamefully disrupted as his wife gets into fisticuffs with his lover, and all manner of authorities turn up up demanding cash that has slipped through his fingers over the years.

Seamus wanted some whisky sprinkled over his grave ...but his mates insist it should be filtered through their kidney's first.

Paddy Vulgarity the publican of the Forcett Inn
Thomas O'Hooligan the Executor of the will
Brendan (or Brenda) Backwards a travel agent representative.

Each are given a copy of a prepared speech, as per the script, which they are encouraged to read verbatim.

The names used for these characters may be substituted for the actual names of the person playing the role if the Producer thinks this appropriate. The playwright believes that to personalise and localise this production will greatly enhance it.

During the Act2 / Act3 break the audience are served their main course. Desserts and coffee are served after the show finishes.

It is during this break that the actor playing Digby Gorrah/ Bill Kelpie/Det. Sgt. Constable and Seamus must surreptitiously conceal himself under the table on which the coffin is set, to make his entrance as Seamus

The cast are encouraged to mingle with the audience during show breaks providing that they stay in character.

If the acronym for Seamus’ union, “FUCKO”, is found offensive, it can be replaced by “CRAPO”. This acronym relates to the Consolidated Restroom Attendants and Panhandlers Organisation which may be used in lieu of the Federated Union of Clerks and Keyboard Operators.

There are nine characters listed below played by a cast of six; three male and three female. It is essential that one of the female performers has musical (keyboard) abilities.

Other characters progress the plot (bad choice of phrase there!) but these are co-opted from the audience to
a) Ensure appropriate audience participation
b) Save money on actors' salaries.

Seamus Shenanigan himself makes an appearance but can he be a real life character given the annoying fact that he is dead??

It is envisaged that the characters Digby Gorrah, Bill Kelpie, Det. Sgt. Constable and Seamus shall all be played by the one actor but this is up to the Director/Producer.