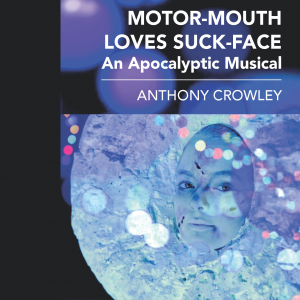 In exactly one minute and fifty-three seconds a solar flare will strike the earth—setting off a chain reaction incinerating every living creature on the face of the earth. But that’s not important right now. What’s important is this.

Welcome to the party to end all parties—where Blasko Tupper, teenage master of the dark arts has just kidnapped her entire school—including Motor-mouth and Suck-face, two geeks in lust and love who have until midnight to lose their virginity, escape through a cosmic wormhole and save the planet—in the other dimension. Everything goes according to plan, that is, until Blasko’s parents escape their cage and start transforming hysterical teenagers into mindless zombies.

With a rock-pop score of songs like My Polar Bear, Heart Be A Radio and I’d Rather Be A Zombie, Motor-mouth Loves Suck-face is a musical comedy about hope, for the young and the young at heart. Did we mention the Bollywood diversion? Prepare to die.

"Has the makings of a cult classic indie musical, with its wild and wonderful story line, weird characters and sense of fun and light heartedness." Theatre People.

Drums, Bass Guitar, Guitars and Keyboard. In the original production the actor played Zombie and Cello.