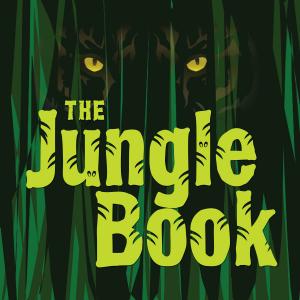 Mowgli’s search for home takes the spotlight in this new imagining of Rudyard Kipling’s classic tale. In this living storybook, Mowgli struggles to fit in with the wolves, the monkeys, and even the humans on his journey to discover where he belongs. Along the way, he must contend with the mesmerizing Kaa and the terrifying Sheer Khan, but with the help of his friends Baloo and Bagheera, Mowgli’s search ends happily. Masks, puppets, and contemporary elements like a trip to the Starbucks in the cell-phone-obsessed city make this new adaptation of The Jungle Book a unique and delightful one.

We open with Baloo the bear welcoming the audience to the Jungle Book via prologue. He will be our narrator. He introduces us to Jungle Law, which includes the command for creatures to “leave humans alone,” before setting up for Chapter 1.

In Chapter 1, Raksha the wolf mother encounters a man’s cub wandering the forest. Having just consumed the baby’s parents, Shere Kahn the tiger claims the man’s cub as his meal, but Raksha’s parenting instincts kick in. She vows to protect the cub. When a battle is about to start, a quick-thinking young wolf suggests that Raksha and Shere Kahn bring their dispute to wise old Akela and the pack’s council, who meet on Seeonee ridge when the moon is full. At the council, a hesitant Akela sides with Raksha, who has enlisted Baloo and Bagheera (a panther) to help raise the man’s cub and turn him into a wolf. Should the baby, now named Mowgli, be unable to become a full wolf, he will be turned over to Shere Khan.

Chapter 2 takes us years later. Mowgli is struggling to fit into the pack. He’s great academically – able to recite the Master Words (which allows pack predators to walk freely in the forest) – but he can’t seem to conquer the pack socially. The wolf cubs nip and pick at him, and generally make his life miserable. After a fight with the alpha cub, Mowgli is left alone to practice his howl. That’s when he meets one of the Monkey People, the Bandar-log, who looks like him and offers to make him king. Before he can leave, Bagheera comes to tell Mowgli the story of his escape from humans, explaining that he learned to be a jungle person thanks to his time with Baloo. Mowgli takes the wrong lesson from Bagheera, believing that you should leave when you don’t fit in, and runs away to join the Monkey People at the Lost City. Bagheera and Baloo learn of Mowgli’s disappearance, and they set off to find him.

Chapter 3 explodes with a monkey party celebrating their new king Mowgli. Meanwhile, Bagheera and Baloo stumble on Kaa, the rock python who hypnotizes his prey. In exchange for Kaa’s help, they offer the monkeys to the snake.

The Monkey people are quickly tired of playing with Mowgli – it’s been several hours – and they overthrow him, tossing him into a cobra pit just as Bagheera and Baloo arrive. The monkeys and Bagheera and Baloo battle as Mowgli recites the Master Words and connects with the cobras. Kaa hypnotizes everyone – including Bagheera and Baloo – and he is about to eat them when Mowgli escapes from the snakes. Unable to be hypnotized by Kaa’s dance, Mowgli frees his friends.

As they return to Seeonee ridge, Baloo and Bagheera realize that they’re not equipped to raise Mowgli. They take him to the edge of a city for humans. A jogger passes by. Intrigued, Mowgli follows her to the city

Chapter 4 opens with the hustle and bustle of a city, as commuters pace back and forth on their way to their jobs, stopping only to sip Starbucks. They discover this strange creature – Mowgli, a boy raised by wolves.  The wealthy socialite Dee-Dee and her husband Duke save him from being placed in a lab, vowing to turn Mowgli into a man. Dee-Dee’s lessons include language, commerce, how to avoid the poor, and how to use fire.

Despite her tutelage, Mowgli retains his animal upbringing. He even finds a lost cobra and takes her out to the fields. There he finds Akela, who has been expelled from the pack. He learns that Shere Khan has taken over, that Baloo and Bagheera have been expelled as well, and that the pack now hunts cattle.  Disturbed, Mowgli returns to the city, but only long enough to learn that Duke wants him to hunt wolves.

He leaves the city for good.

Chapter 5 finds him in the jungle, or what was the jungle. Humans have replaced it with cattle. What good is Jungle Law when there is no jungle? As he laments the loss, Bagheera and Akela appear. He decides to confront Shere Khan, as he has a proposal for the pack. They head up to Seeonee ridge where the council is convening. Shere Khan is making a judgment against Raksha when Mowgli interrupts, asking for a few words. Shere Khan attacks Mowgli, and Mowgli defends himself with the “red flower” –  fire. Shere Khan knocks it out of his hands, setting the river on fire. In the battle, Shere Khan falls into this river. No more Shere Khan.

Mowgli can finally present his proposal: with the jungle destroyed, they can disappear into the mountains and create a new pack, one for all of the outsiders who fit in nowhere else.

Our story concludes as a surprising number of the jungle animals follow Mowgli into the mountains.

Baloo – A bear, a teacher of wolf cubs, and our narrator.

Bagheera – A panther, generally gruff and grumpy to everyone but Mowgli.

Mowgli – The man’s cub, raised by wolves. He struggles to fit in.

Akela – Head of the Seeonee pack; the largest and oldest in the pack.

Shere Khan – A man-eating tiger with his eyes on taking over the wolf pack.

Kaa – An aggressive boa constrictor happy to eat anyone who crosses his path; with his dance and eyes, he hypnotizes his prey.

Alpha, Beta, and Ralph – Young wolves of the Seeonee wolf pack. Alpha is their leader, and he doesn’t much care for Mowgli. Ralph is a bit dopey.

Dee-Dee – A wealthy city-dwelling human; she aims to ‘civilize’ Mowgli.

Wolves (optional): Only Alpha, Beta, and Ralph have lines, but you can add a few more wolves to the pack.

Monkeys (or “Monkey People” or “Bandarlog”) have a frenetic energy and don’t like rules; one moment they crown Mowgli king, and the next they’re throwing Mowgli into the snake pit.

Snakes (or “Poison People”) live in this snake pit.

Citizens have too much to do, with their work and cell phones and Starbucks.

Casting Note: Doubling is possible, though not required. Although the gender pronouns in the script follow the corresponding characters in Kipling’s The Jungle Book, these are flexible. When produced at Big Idea, Beta, Kite, and Kaa were all changed to female.

No Doubling: Baloo, Bagheera, and Mowgli.

Setting: Chapter 1 and Chapter 2 take place in the jungle, in an area ruled by the Seeonee wolf pack. Some indication of a ridge or rock should exist, as Shere Khan will later fall from this.

Chapter 3 is both in the Lost City (ruins of an ancient civilization claimed by the monkeys) and in the jungle as Baloo and Bagheera track Mowgli down. Mowgli is thrust into a snake pit.

Chapter 4 takes place in the city, which has some litter in it, and Dee-Dee’s estate.

Chapter 5 is once again in the jungle, but this one is full of garbage.