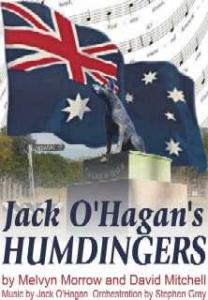 Jack O'Hagan was Australia's most prolific song writer from the 1920's until the 1950's. His hits are part of the nation's psyche 'Our Don Bradman' ' Ginger Meggs ', 'When the Dog Sits on the Tuckerbox', ' Kingsford Smith' and so forth. Melvyn Morrow and David Mitchell have created a joyous musical that premiered to critical acclaim under the direction of Nancye Hayes at Sydney's Marian Street Theatre in 1997. Here's what the critics said.

" the friend who accompanied me was overcome with emotion. 'Great show' she sobbed wiping away another tear as the finale tracked back to Gundagai" Carrie Kablean - Sunday Telegraph

".. a funny nostalgic look at a unique phase of our past" Julie Moffat - The Manly Daily.

Can be staged with just 6 on a small stage with principals taking up to 4 roles each. Or with large cast of 20 and as many chorus as you want.