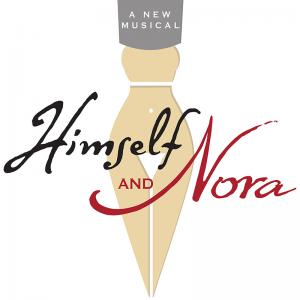 It is one of the world’s great romances. Himself:(James Joyce) an internationally acclaimed author whose words awakened the world. Nora: the country girl from Galway whose burning sexuality and acerbic wit ignited his genius. Himself and Nora is a passionate musical that reveals the private life of one of modern literature’s most controversial figures. Ripped from the pages of their intimate life together and inspired by their Irish roots, this untold story of writer James Joyce and his muse is a scintillating exposé of the unconventional and passionate love affair that changed literature forever. An acclaimed hit direct from its Off-Broadway run!

NOTE: James Joyce dies 15 minutes before Nora gets back to his hospital room.

1941, the wake of James Joyce. A Catholic Priest prays over his body, then opens a window to “set the spirit free” while Joyce’s deceased parents observe from the afterlife. Nora enters and is angry. She yells at Joyce’s body, questioning why he had to die 15 minutes before she could get to his hospital room (“Himself and Nora”). Since it’s a musical, Joyce pops up and argues back. The Priest and parents join in, insisting Joyce’s soul must be set free. At the end of the number, Nora slams the window shut and declares Joyce’s soul is not going anywhere until she hears the words she wants to hear. Light change, 1903, Joyce at his parents’ home in Dublin. His mother is dying, and he observes Da drinks too much. They discuss life and Church. At his Mother’s funeral, Joyce refuses to kneel (“Land of Erin”), arguing with the Priest and Da. He proclaims he will write and never bow to a Church that betrays the Irish spirit. Light change, June 16, 1904, James and Nora meet and sing their first metaphoric kiss (“Kiss”). Though a chambermaid, she is insightful, witty, beautiful, and funny. He is brilliant and arrogant. Together, they are electric. They commit to love each other forever without marriage. Joyce convinces her to leave Ireland to escape the censorship of the Irish Church and to help him become a great writer. (NOTE: From this moment on, in Joyce’s imagination, the Priest follows Joyce wherever he goes.) On the ship to Trieste, Joyce and Nora play double entendre word games with another (“Compatriots in Lust”), and the country girl’s Gaelic language begins to influence Joyce. In Trieste, another Catholic country, Joyce can’t get published again. Reduced to teaching English to Italians, he discovers the power of the sound of words in the full cast number (“River Liffey”). The discovery affects his writing, but with no money, he drinks and argues with Nora. He storms out one night, but Nora works through her anger and determines to (“Stand Fast”). Joyce appears at an eye doctor’s and shows the first signs of losing his sight. More troubled about whether Nora loves him, he sings (“Stand Fast Reprise”). But Nora does stand fast and sends Joyce back to Dublin to hopefully get published. She promises to write “dirty” letters to keep him company while she remains in Trieste with their two young children. However, once in Dublin with Da, Joyce must convince Nora to write those letters in the full cast number (“Let’s Have a Drink”). Although rejected by over 50 publishers, Joyce is inspired by Nora’s words and faith and declares he will write his greatest novel, Ulysses (“Twists and Turns”). Back in Trieste, the couple is at their best. Nora controls his drinking; he writes; they play word games and are great lovers (“What Better Thing to Do”). Joyce’s eyes worsen but his writing is beginning to attract attention. After reading excerpts of Ulysses, the scandalous poet Ezra Pound convinces the socialite/publisher Harriet Weaver to support Joyce and pay for him to go to Paris in a vaudevillian number (“Pound and Weaver”). At the end of Act I, Nora and cast convince Joyce to go by appealing to his ego: “All the great writers are in Paris” (“I Say, Yes”).

In Paris, every publisher fears the obscenity laws, so Joyce still can’t get published. Pound introduces Joyce to Silvia Beach. She publishes Ulysses and makes Joyce a scandalous sensation (“The Grand Himself”). Back in Dublin, Da dies (“Land of Erin Reprise”). The children, Giorgio and Lucia, are now grown but have not been parented well. Giorgio drinks, and Lucia shows signs of schizophrenia (“The Children of Mister Joyce”). Although Joyce is published and famous now, he is not making any serious money, because Ulysses is still banned in America. With fame fueling his ego, Joyce drinks and crosses a line in an argument with Nora (“Without A Man”). She leaves him. Joyce, alone and lost, begs forgiveness (“Always in Love”) and wins Nora back by proposing to her after their 27 years together. They are married (“I Do”) and then receive word that the ban in American has been lifted on Ulysses.Unfortunately, in the flicker of an eye, happiness goes. Joyce has had 12 eye operations at this point, all without anesthetic, and is legally blind. Lucia has been placed in a mental institution (“Twists And Turns Reprise”) and it is 1941. The Nazis are invading. They must leave Paris at once and leave Lucia behind. Weak and broken, Joyce asks Nora if she had to do it all again, would she still do it with him. On the train to Zurich, she replies that not even death could take him from her (“What Better Thing to Do”). In Zurich, Joyce is struck by an ulcer, and in the hospital, assures Nora he is fine and the aging couple sing a sweet song of love and lust (“Touch Kiss”). Nora leaves and Joyce dies. Light change, and we are once again at his wake with the Priest. This time, when Nora argues with the soul of Joyce, the window remains open. He pops up, gives her his writing book, and swears everything he has ever written is all because of her (“Finale: River Liffey”). The full cast sings, and Joyce walks into the light as Nora says the word she always wanted to hear, “Love.”

Author’s note: All of these characters are real people, not caricatures of themselves.

The Authorized Materials/Rehearsal Package for Himself and Nora includes: Production Scripts Vocal Scores Orchestrations: Piano/Conductor Score Guitar Bass Drums Reeds (Flute, Clarinet in Bb) Official Logo Pack Now Included! To help you promote your show, Stage Rights now includes a logo pack with your license. The logo pack includes high resolution versions (both color and black and white) of our show logo. The logo is the portion of the artwork with the title of the show. The surrounding artwork is also available for an additional fee. Optional Materials: Original Cast Recording Stage Manager’s Script – Printed on standard 8.5” x 11” 3-hole-punched paper, with the same page numbers and text as the Production Scripts, but with more space on the page for notes and cues.

16% of Box Office. Plus Hire Fees for orchestrations, script and music.