Beauty and the Beast (Musical) 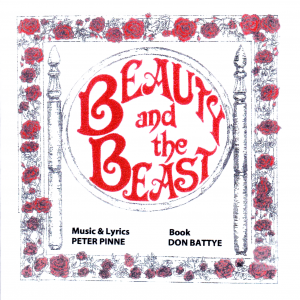 “One of their best shows ever.” (Australian)

Beauty and the Beast is one of the most beloved children’s stories of all time. There has been countless version of the tale of a handsome Prince who is turned into a Beast by a wicked witch, and can only be restored to his former self by the love of the most beautiful girl in the land.
This version in its original production had the critics going overboard; “A deft musical comedy,” “an enjoyable and energetic show,” and “this show sparkles.” With a superlative score that includes the hauntingly beautiful “Will She Love Me?,” sung by the Beast, this version brings the evergreen fairytale brilliantly to life.

The Prince has a Right Hand Man whose job it is to find the most beautiful girl in the land to marry him.

An ugly witch has other ideas. She wants the Prince for herself.

A sweet young girl, Beauty, tends to her garden of flowers as she bids her Merchant father goodbye. She asks him to bring her back one red rose.

The Prince tells his Right Hand Man he wants a girl who is perfection, when the witch enters and offers her hand. The Prince rejects it. She is livid. Alone, the witch mixes a potion that will make the Prince turn into a Beast. Later, she gets him to drink the potion and he turns into a Beast.

Beauty’s father loses his way in a storm and finds himself outside the palace. He sleeps that night at the palace and in the morning finds a rose bush on which there is one red rose. He picks it and is confronted by a horrified Beast who tells him that by picking it he has put a curse on himself and the Beast.

Beauty’s father makes his way home and gives Beauty the rose. He tells her of the curse, and that as she is the first person he has seen since picking the rose, Beauty must go to the palace and live with the Beast. Beauty sets off for the palace.

The Prince looks in his magic mirror and sees Beauty. Meanwhile the witch still believes she’s prettier than anyone else. She goes to the palace and poses as Beauty. The Prince is forced to let her stay.

When he looks in the magic mirror again he sees he has been hoodwinked. Beauty is still on her way to the palace. When she arrives the Beast is besotted with her. She is everything he ever dreamed of. He hopes she will love him even though he is a Beast.

The Witch has not given up hope and plots to woo the beast. Beauty looks in the magic mirror and sees that her father is ill. She tells the Beast she must go to him, but promises to be back. Beauty nurses her father back to health and tends to her garden. The Beast is sick and dying. His Right Hand Man wants to go and fetch beauty, but the Beast stops him. The only reason she should come back is because she loves him.

The Beast quietly starts to sing which Beauty hears in the forest. She returns to the palace with the red rose and declares her love for the Beast who is immediately transformed back into the handsome Prince. They are finally together.

R,H. (Right Hand Man) 25 A man who does everything for his master. Efficient, neat and ordered. Light tenor voice.

Prince/Beast 25 A young handsome man who seeks perfection in his princess. He learns a very humbling lesson when a witch puts a curse on him. His inner warmth shows through when he is transformed into a Beast.
Strong tenor voice.
Beauty 20 A sweet young girl who has a green thumb and loves the garden. She finds the goodness in everyone. Looks are not important to her. Soprano range.
Witch 30 An evil witch who wants to marry the Prince and will do anything to get her own way. Can be played as a Panto Dame.
Father 50 A kindly, upstanding merchant, who loves his daughter Beauty, and will do anything to make her happy.
Chorus of Six

Will She Love Me.